Ku64 has been focusing on prevention for more than 30 years. We rely on precaution through professional and modern dental cleaning (no-pain prophylaxis) and regular monitoring.

We are now the first PerioPrevention Center in Berlin and one of the few in Germany. This is a certification in the field of immunological diagnostic technology. The patented and ultra-modern saliva diagnostic technology helps us to preserve the teeth, protect the implant and maintain general health. We offer this biomarker test to every patient cost-effectively with every prophylaxis. Even early detection of diabetes is provided by the quick test. And best of all, it doesn’t hurt – just a little saliva is enough!

Experts estimate that about 28 million people in Germany have periodontitis in need of treatment. One in two people aged 40 and over is affected. But there are only about a million people in treatment. The perioSafe quick test detects undetected periodontal inflammation before tissue degradation in the tooth-holding apparatus occurs.

The connection between mouth and body

Numerous studies as well as the close interdisciplinary cooperation of physicians prove the connection between the existence of periodontal inflammation (periodontitis) and the following diseases:

What does the Perio Safe test do?

PerioSafe is the world’s first rapid test for the early detection of hidden removal processes in the gums. PerioSafe can help in particular in at-risk groups to indicate previously undiscovered periodontal inflammations, which might not have become apparent until months or years later by means of a probe or X-ray. This allows prophylaxis to be initiated at an early stage, ideally before symptoms appear.

For the first time, we can carry out enzyme diagnostics directly at the treatment chair in just 20 minutes, thus quickly and precisely determining the therapy requirements. Subsequently, and as part of the follow-up, a re-test can provide evidence that the tissue degradation process could be reduced by the therapeutic measures.

We advise everyone over 35 years of age to take regular tests, because periodontal early detection also significantly reduces the risk of tooth loss. Prevention is important and cheaper than dentures. While periodontal treatments are covered by most health insurance companies, patients often have to pay for dental prostheses themselves. If you have a positive test result, you can be included in our Perio Prevention Program. Here, an interdisciplinary team of experts takes great care to reduce the risk factors for periodontitis to such an extent that you either recover quickly or, better still, stay healthy and not get sick at all!

Chronically ill people are more likely to develop periodontitis, with the course of periodontitis much stronger and more pronounced in them than in people without risk disposition. With the PerioSafe oral health test, which you can also perform comfortably at home in 5 minutes, you can detect early with the aMMP-8 technology whether tissue or bone degradation is taking place in you. If the test results are positive, you can visit a dentist/periodontologist at an early stage and take appropriate measures in the early stages to prevent periodontitis from destroying further valuable tissue.

Unfulfilled desire to have children and premature birth

Especially couples with a desire to have children as well as chronically ill people, such as diabetics, rheumatics and cardiovascular patients, benefit particularly from this preventive program, because not only the teeth are saved here, but also the general health is improved so significantly that, for example, a long-awaited pregnancy can then occur.

But with our preventive program you also reduce your heart and brain infarction risk, improve the treatability of rheumatoid arthritis and diabetes.

How much does this test cost?

The cost for cashiers and self-payers is 50 euros. Private patients will receive a refund.

Our practice team will be happy to advise you on PerioSafe and how you can permanently banish the vexed topic of periodontitis from your life. 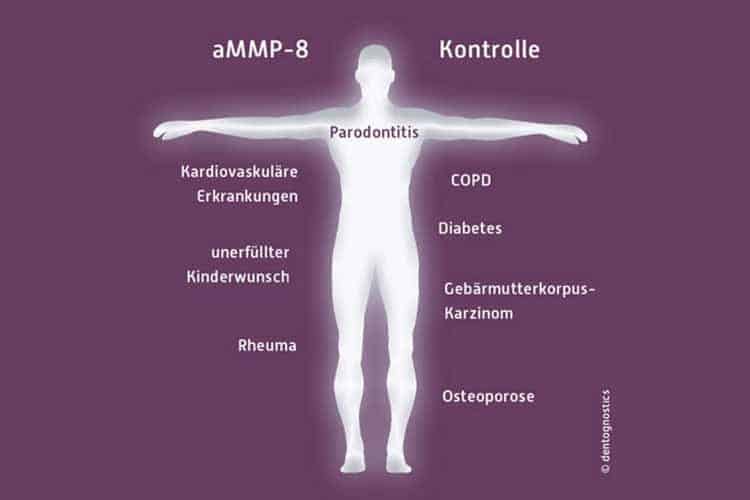